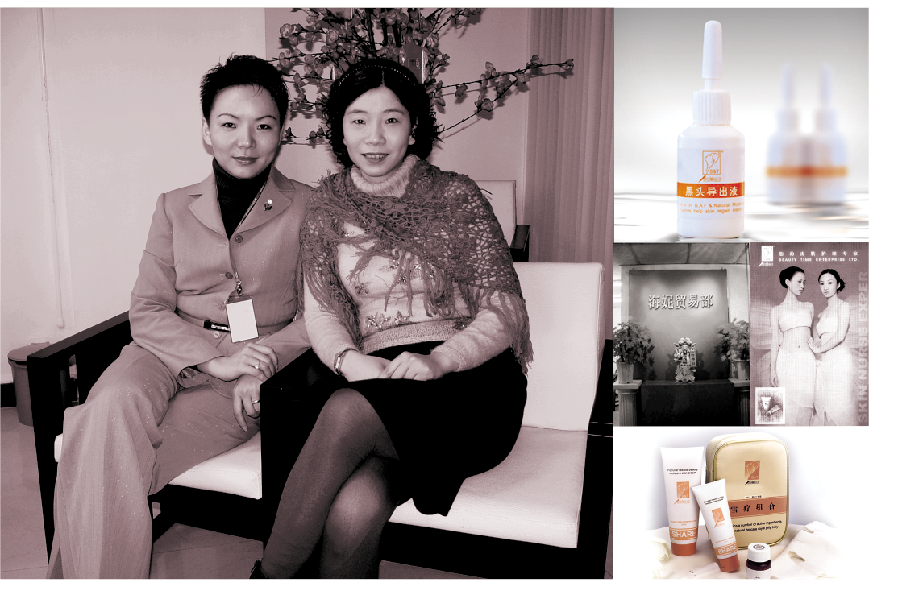 ● 1995, when Zhang Caihua, a marketing talent met Liu Zhiwen, an expert in formula scientific research. Haini Trade Department, the predecessor of Chants with unique scientific and innovative gene came into being.

● Two years have passed before it independently researched and developed comedones derived liquid. It has become the leader of painless comedones removal in China’s cosmetology having created the legend of sales to 10 million people.

● The snow therapy package and comedones removal packages independently researched and developed are the first facial nursing independent packages in the industry. They have created the new era of exclusive personal nursing.

● The skin enhancement elements of comedones removal liquid and snow therapy are awarded the national prize for national science and technology. The industry has given comments that China’s professional cosmetology has entered the age of “the combination of healthcare and efficacy”. 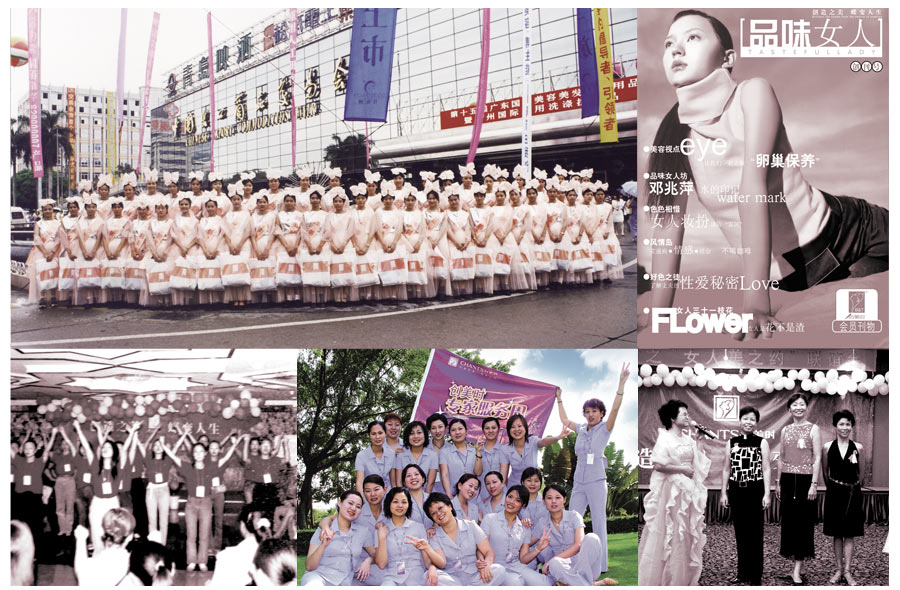 ● In 2001, It was the first to build the brand image store in the industry and brand service team in the channel. Within one year, more than forty top quality provincial markets have been developed.

● It has created the terminal activity for promoting friendship of “Engagement of Women’s Beauty” to push forward the terminal consumption by nationwide franchised outlets, which have won high credit by millions of consumers.

● It has created the promotion activity for “national women’s ovary care month”, which has stirred up the world of cosmetology and has been imitated by many manufacturers one after another.

● It has created “Quality Women”, a nonprofit women’s magazine edited and published by cosmetology enterprises in China, which is highly appraised of by end consumers with the publication of 1000000 copies for each issue. 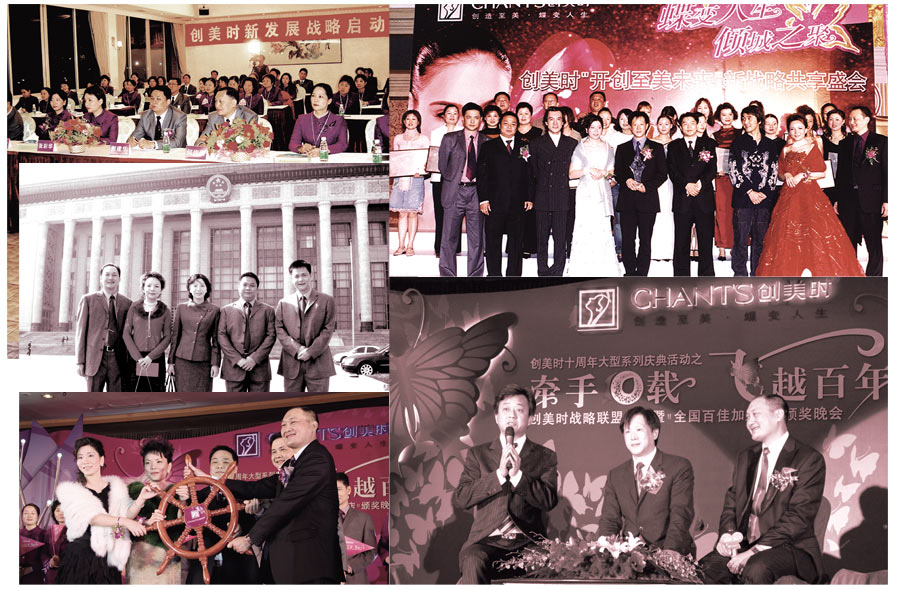 ● It is the first to establish the policies for China’s professional managers in the world of cosmetology starting the transformation of traditional family management mode into a modernized enterprise management mode. Its insight has caused a stir in and outside the industry.

● In 2004, the “Creating Perfect Future” new strategy sharing meeting has published the strategy of 100-year brand of Chants. The media fames Chants as the pioneer of China’s professional cosmetology.

● In 2005, it was the 10th anniversary of “Creating Perfection with Butterfly Change Life”. Zhu Jun, a famous host was invited to have an interview about the butterfly life to create the marketing leader in the industrial meeting. ● In 2006 when the chief representative for SHOTHYS Group in China’s area, a famous brand in France, visited Chants, the managing director of the Company led his officers to leave for Europe for a survey, and achieved new progress in the business negotiation with SHOTHYS Group, GATTEFOSSE Group and MAC Group of the Switzerland.

● In 2008, it launched customers’ new products designed for Asian women together with BASF, one of Top 500 in the world. They became marketable synchronously.

● The automated production system is used. All indicators of products conform to international standards setting an example for the same categories of products in the industry. ● It is the first to establish the representation for end consumers in the industry and exclusive festival of end consumers – Festival of Chants’ Beauty, well received by 5000 franchised outlets.

● Chants’ brand strategic upgrading has been externally published. Jiang Qinqin, a famous movie star has been invited to act as the speaker for Chants’ brand.

● Chants’ brand image has been further upgraded and new business expansion become more competitive. Li Sheng and Hai Lu from “New Princess of Pearl” become the new speakers for Chants’ brand. The popular advertisements take advantage of marketing to stir up a new round of popular trend to follow. 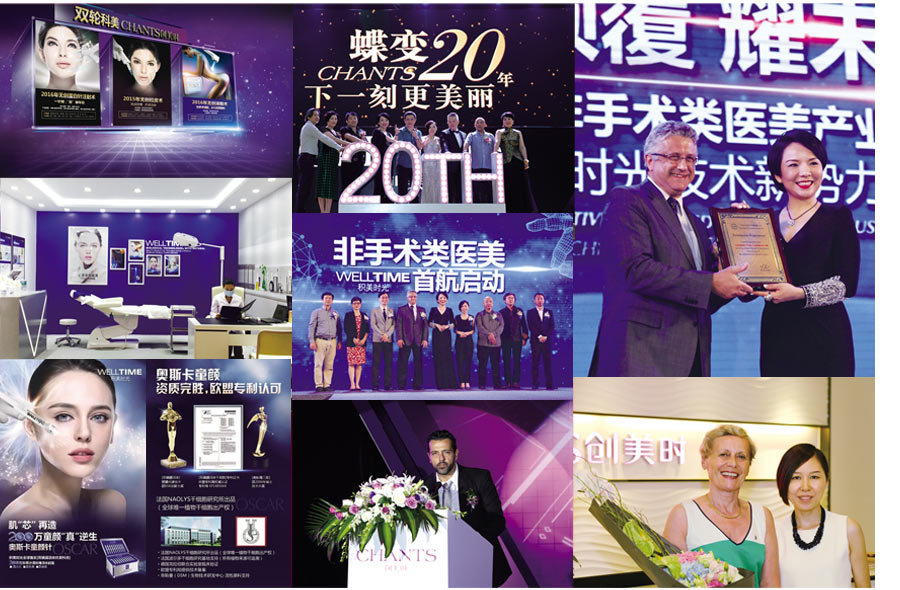 ● At the 18th and 20th anniversaries, partners highly appraised of Chants for its cultural attraction. Chants’ image has been upgraded taking on a completely new look.

● Aozi Company under Chants has enabled Class 100000 dust-free clean workshop, with the full set of equipment living up to national Class 300000 cleaning requirements.

● The WELLTIME project brand has been marketable creating a new pattern of reverse age management in China.

● Chants has been chosen to enter International Federation of Societies of Cosmetic Chemists as a cosmetology enterprise from China, and it has become an honorable member.

● Its product research and development and clinical treatment has been internationally connected. German Klaber Laboratory and French Bordeaux Stem Cell Research Base have become the “backyard” for the scientific research of Chants’ products. 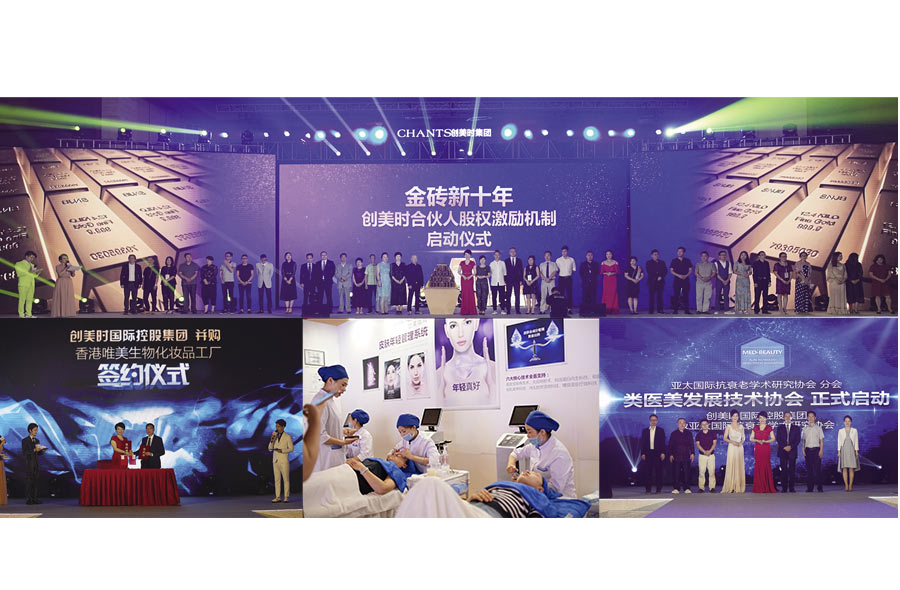 ● In 2017, Chants’ skin microbiology provided customers having different skin demands with skin management solutions by layers, thus having satisfied the simple, convenient and effective facial beauty demands of younger consumers born after 1980s and 1990s. Once they were launched, they became the most popular in the market.

● In 2018, it was awarded to one of Top 10 competitive brands in China (the industry). Zhang Caihua, the chairman of the Board, was chosen as the outstanding figure for 2018 brand construction, which is the symbol that Chants’ competence has stepped on a new and higher stage.

● It has integrated the authoritative expert resources of Asian-Pacific anti-aging academic research institute and improves the research and production strength of Chants in the industry.